long time no see! i am back at the office today and back at the computer. i have been keeping tabs on your blog posts via my little ipod while on vacation and i loved reading everyone's 2012 wrap up posts. now i feel like i need to catch up!

i'm going to start by complaining, but then i'll move on to some more positive news, promise! not sewing related, but this is how my new year started: we rented a car to drive to florida to visit some of my family because we didn't want to put all of the miles on our cars. and when we got home on sunday night, we found out that both of our cars had been broken into. so my vacation ended with talks with the police, the insurance, taking my car the to shop, and picking up a new rental car. what fun! they didn't really take anything. the only thing of value in my car is the stereo and they didn't take that. but now i have to get a new car door. the insurance covers it, but i do have to pay my $500 deductible. and we found out that they hit the entire street because some of our neighbors were also vandalized. at least they didn't break into our house.

anyway. so. i haven't bought my new laptop yet. i was hoping for an after christmas sale, but the price looks the same. (i was looking to get a macbook pro.) i did get a threads magazine for christmas! yay! but i didn't get any gift cards for fabric like i had hoped. i guess for my birthday i need to not be so subtle with my requests =)

but, completely out of the blue my sweet husband bought me this… (drum roll) 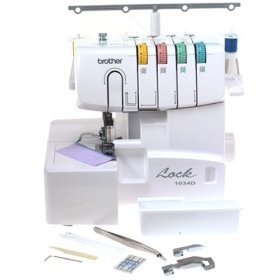 a serger!!!! yayyyyyyy!!! i didn't even ask for it! so i signed up for a class on serging. i've used one several times before, but i still need to learn more. very exciting =) and i need to go buy some white and black thread cones because it comes loaded with rainbow colored thread. i wanted to whip up a top right away, but i don't really want rainbow seams inside. i'm sure the colors help with figuring out how to rethread…

now it's time for a wrap up of the rest of the christmas gifts i made: 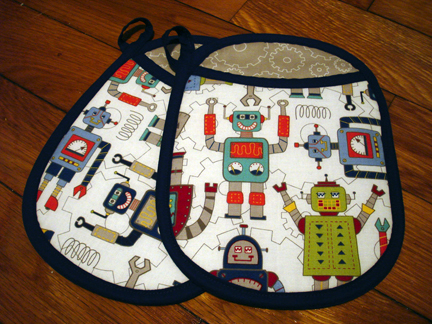 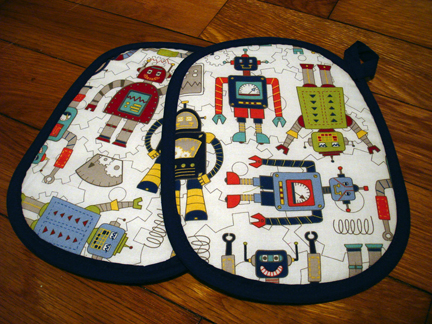 those were a lot of work. i re-did the bias tape several times to get it to look good on both sides. the problem was with all the layers. it was pretty thick. i was happy with how they turned out and my husband wanted to keep them for us. but i gave them to my brother anyway. not sure if he really liked them. he's hard to impress. ah well. i tried. i probably won't be sewing gifts for others anymore unless someone actually asks for something. except baby aprons! those were easier and well received. so i might still make those. my cousin is expecting in june, so i'll make her some =)

not sewing, but i did make earrings for my sis-in-law, brother's fiance, and mother-in-law. the colors in the photo just didn't come out well. the top left pair are magnesite (?), the middle pair are jade, so they're actually a dark green color, and the top right pair are amethyst, so they're really purple. 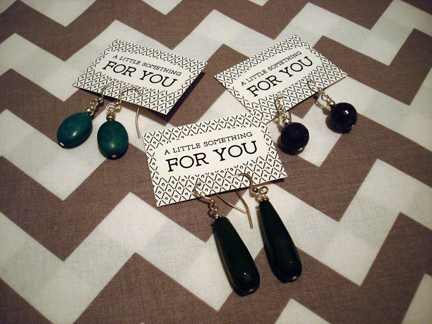 back to sewing. i made 2 clutches for my best girl friends. i haven't had a chance to give them to them yet. so i'm only hoping that they'll like them. i picked the fabric when i noticed one of my friend's iphone case was grey chevron patterned. but then the next time i saw her she had changed it to something else, so i hope she still likes grey chevrons! ha ha! and my other friend likes yellow and i thought the teal zippers were a nice contrast. 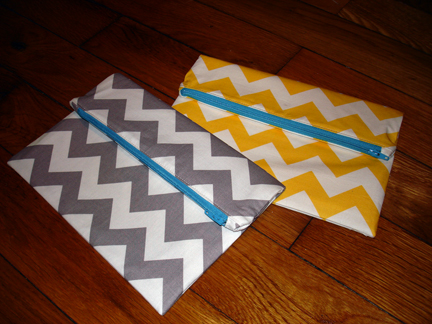 i got the idea from the pattern runway tutorial, but then i didn't use their tutorial at all because the size of theirs wasn't exactly what i wanted, so i just made my own, and then i just finished it the way i wanted based on doing another zip pouch. 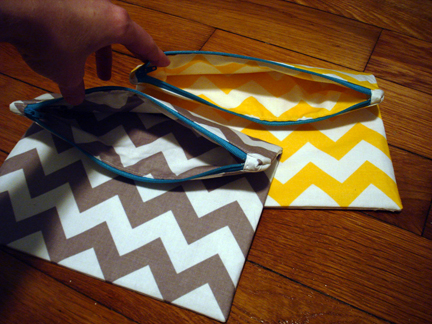 i used the same fabric for the insides. i was going to use a teal to match the zipper, but i didn't want it to show through to the white on the outside. i did line it with heavyweight interfacing (or maybe it was medium weight?) but i had enough chevron fabric (just enough) that i did the insides the same as the outsides. 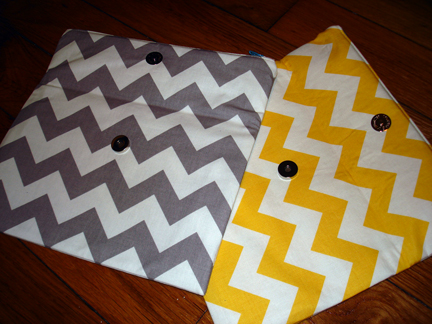 check out my first magnet snaps! they were easy-peasy. just be sure to attach them before you finish sewing in the lining. and on the website for the snaps it says to push the back prongs inward, but another book said to push the prongs outward, and i think outward it more stable. 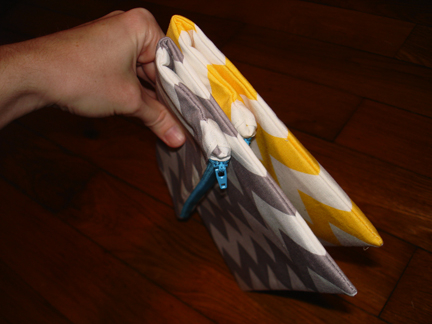 and check out my stripe matching on the sides. yeahhhh! i don't think my friends will even notice, but whatev 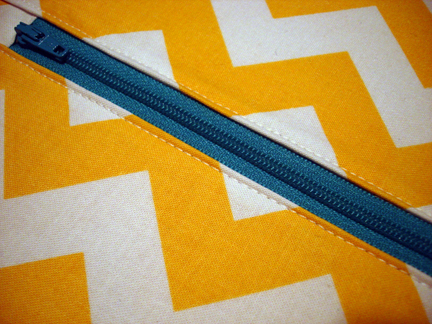 and here's some close up zipper action. i thought it looked pretty sweet. =)

in other news, i received a really awesome package from Abby at Sew Get Dressed! i'll be doing a separate post on it. it really was a bright spot on that day because my neighbors were checking our mail and they brought the package over to me when we got home, which was after i had just found out that my car was vandalized. anyway, be sure to check out her blog, but you probably already do!

andddd, the lovely Sabs at Tybalt: King of Cats nominated me for a blog award, so i'll be posting on that soon too. i just need to think up answers and everything! she has a really cute blog, so be sure to check her out, but again, you probably already do!

hope you all had a great holiday and a wonderful new year! i'm looking forward to seeing all of your 2013 projects! what are you working on this month?

Posted by soisewedthis at 5:55 PM