current projects and other news

i haven't made time to post in the last week and a half, but i did finally finish hemming the last dress i was working on, and i used my blind hem foot, which was a first for me! it turned out well, but there were several spots that didn't catch, so i went over it again. i think it looks pretty good, but i haven't worn it yet.

and then i made this top, based on the sewaholic alma, lengthened by 2 inches, with modified sleeves, a lower neckline and contrasting bias binding. it looks cute in the photo, but i haven't worn it either. and the teal bias binding matched the centers of the little dots in the print. i wish the fabric was softer. i do like the print though. 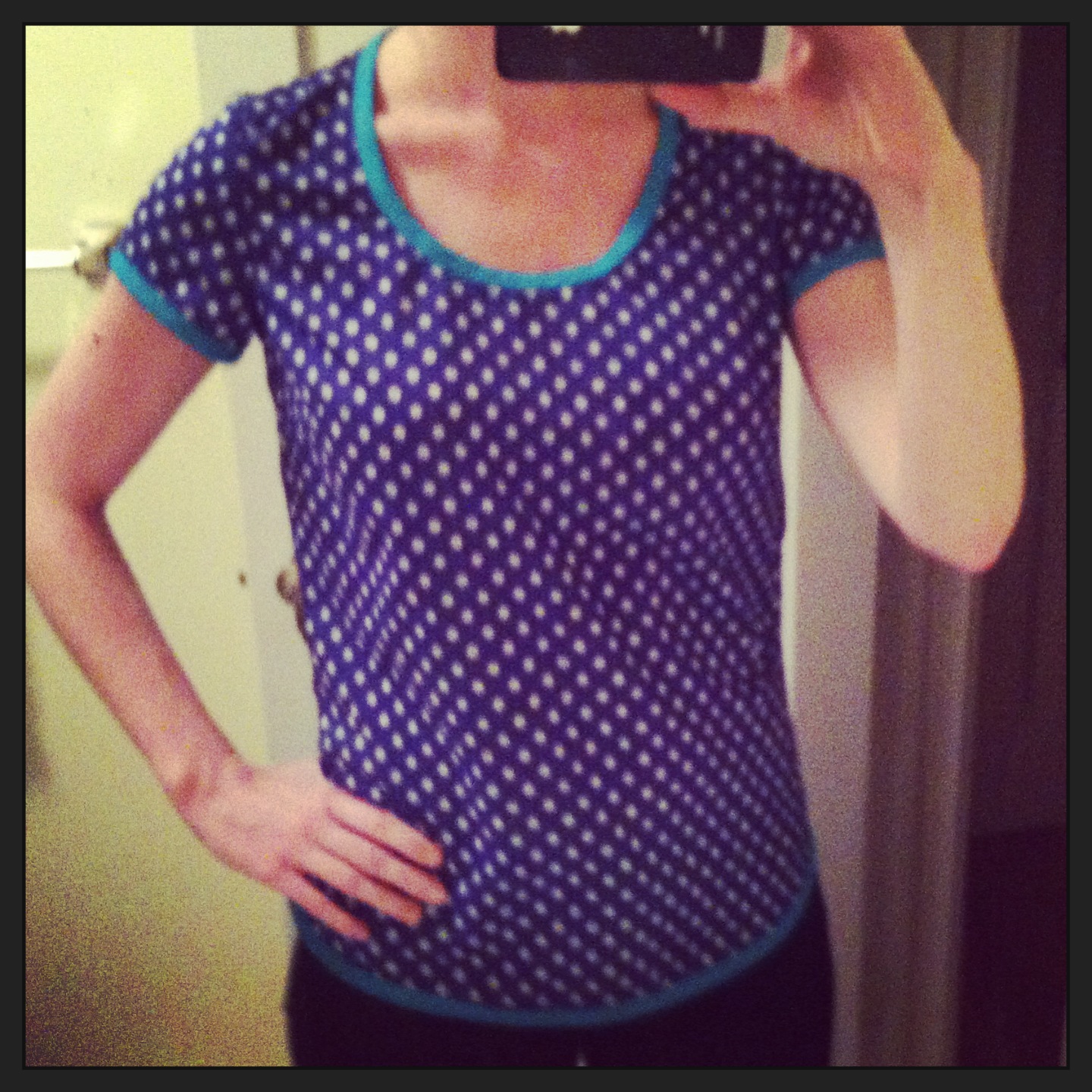 anyway, so i wasn't super pumped about the final results of those projects. they turned out well. but i don't gravitate toward wearing them. if i saw them in a store i wouldn't buy them, probably wouldn't even try them on. so i'm hoping to sew something that i would snatch up if i had seen it in a store. something that i really love and get excited about wearing. am i asking too much???

so i'm using this striped fabric from fabric.com that i almost sent back. i do love the colors of the stripes, but the feel of the fabric was not at all what i expected. that's what happens when you order fabric online and don't know much about fabric. but hey, i'm still learning, well trying to teach myself. the description said ITY knit. i've heard that term mentioned before on other blogs, but still didn't really get it. when i read "knit" i thought soft knit fabric. what i got was slinky fabric that feels like it could almost be a swimsuit.

so i used a RTW tank top and dress to help draft a dress bodice, tank top style. i decided to just make it easy on myself and made the front and back pieces exactly the same. this fabric is super stretchy. it's also slightly see-through in the white and yellow stripes, so i fully lined it with the same fabric being very careful to match the stripes. this also solved the whole problem of how i'm going to bind the edges. yes i planned that. 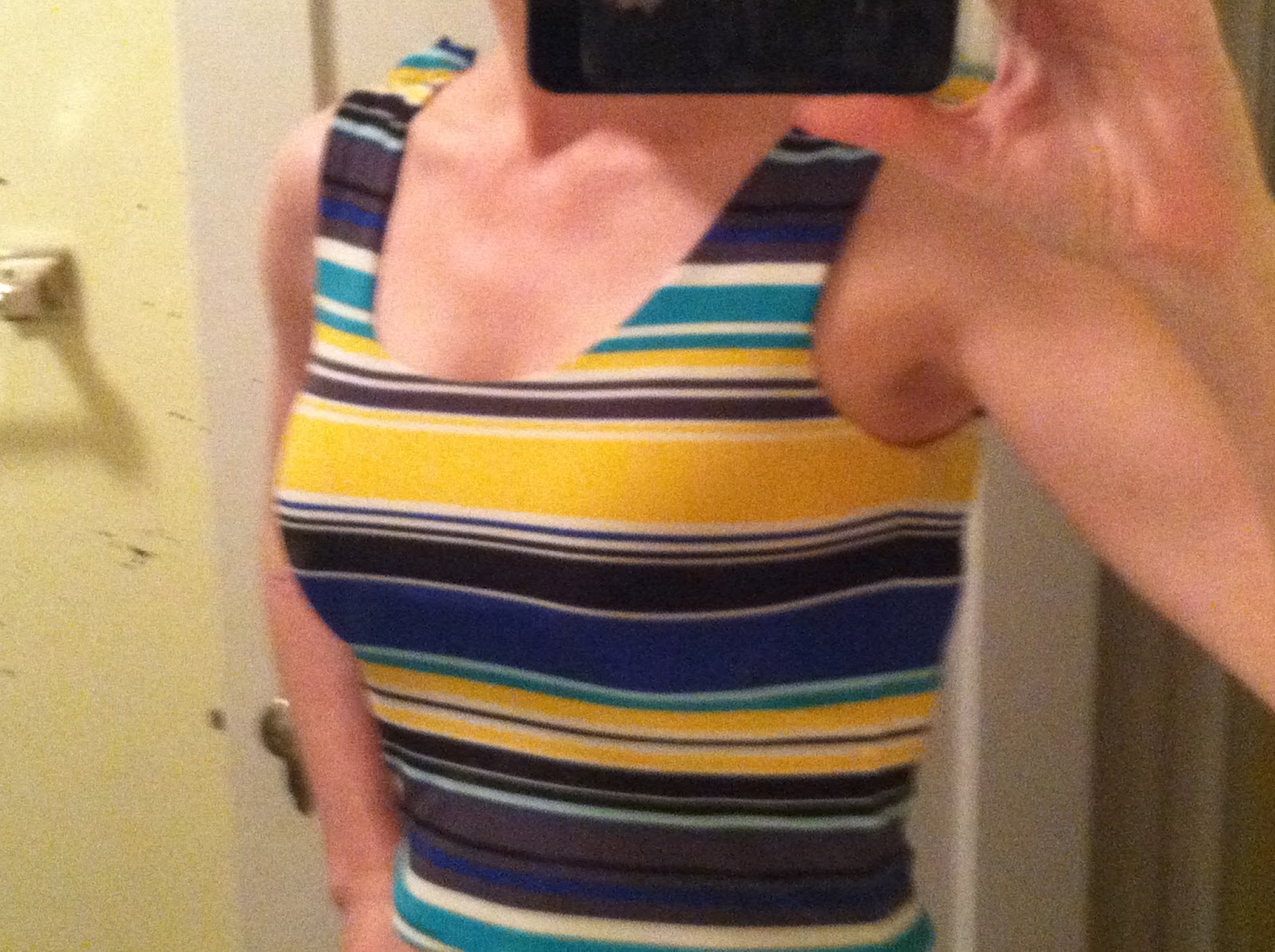 i'm super proud of my stripe matching and yes the other side looks just as good =) in that photo the shoulder seams are just pinned, so i need to finish those and then attach and hem the skirt. i have enough fabric that this could be a maxi dress. or i could make it knee length. and i'm running the stripes vertical on the skirt, just for fun. what do you think? maxi dress or knee length?


in other news, we added a new member to the family last saturday! we had been talking about this for awhile, and we finally took the leap... and adopted a dog! 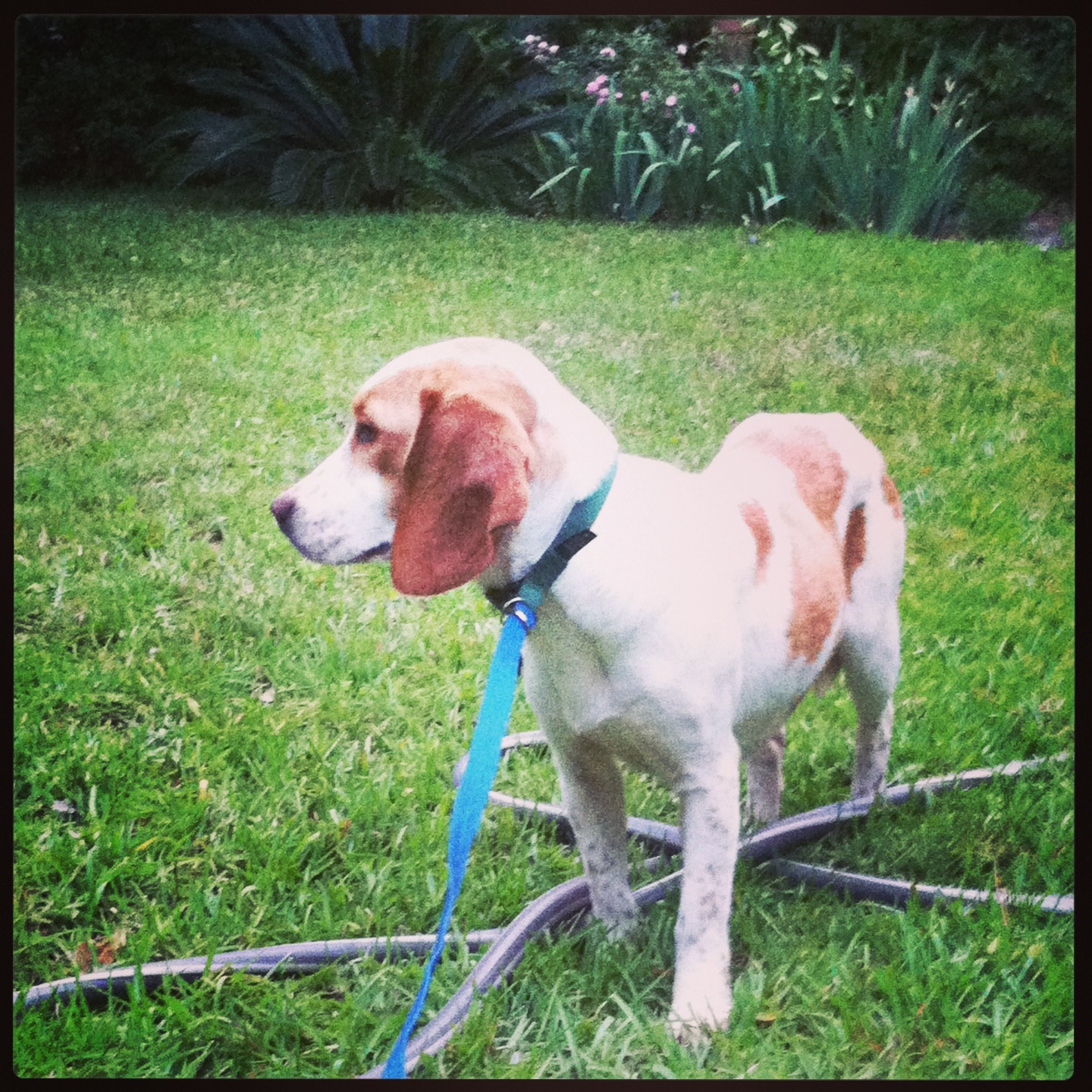 we named her Ella after Ella Fitzgerald (my husband picked it) and she's a rescued dog. she was found lost or abandoned on the side of a highway. at the shelter she was hiding in a corner, scared and shaking. she's a little beagle mix, about 5 years old, they guessed. she's also undergoing heartworm treatment. who knows what else she's been through.

but she's adorable and we're in love with her. she's very sweet, but very shy. she's making small progress every day. here she is curled up in my lap. (note to self: go pee before holding the dog in your lap because after she gets comfortable and falls asleep, you won't want to move her.) 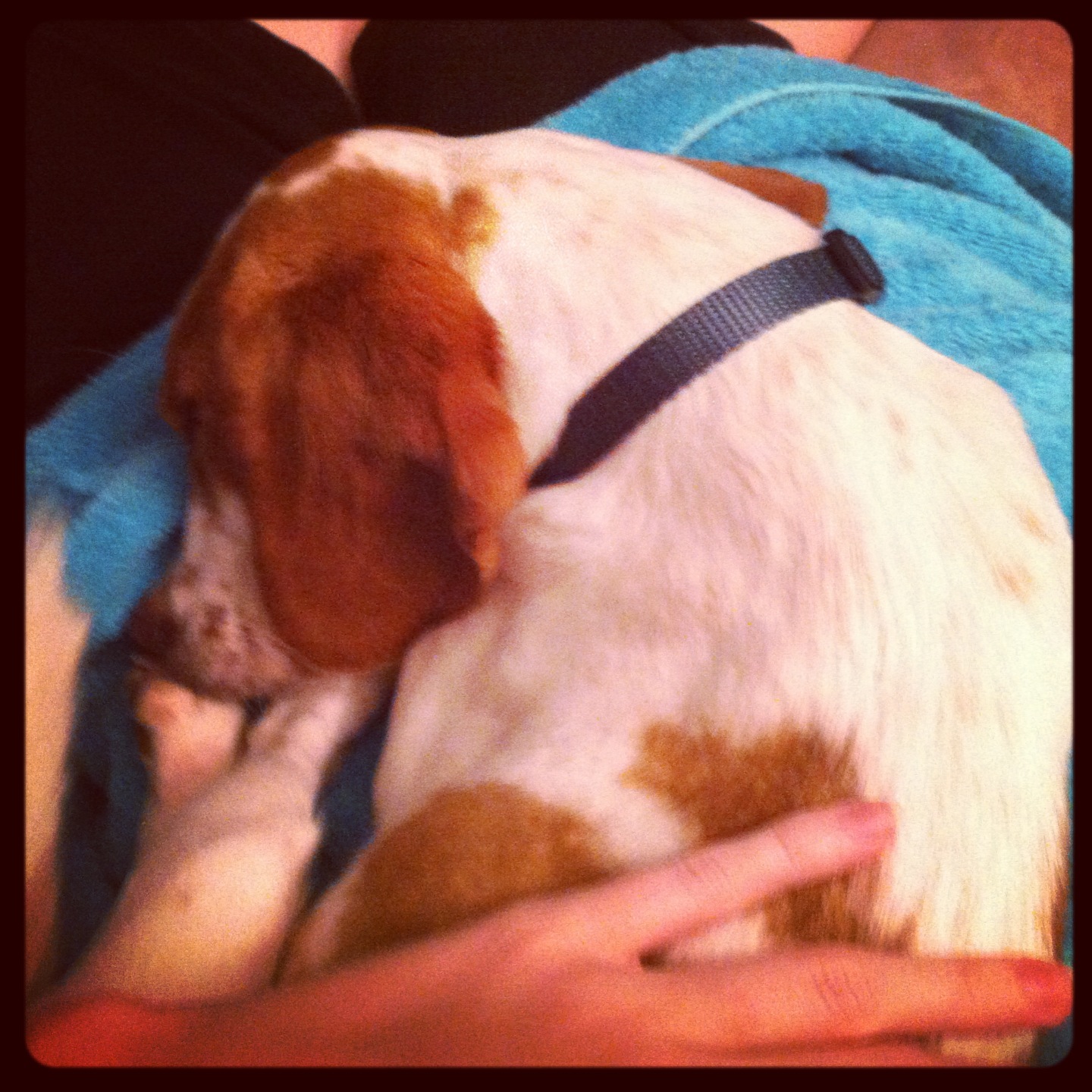 so i had several gift cards from my birthday, and i've been trying to think of what to buy. i finally settled on 2 sewing notions, but that barely made a dent. so i'll share what i picked, and maybe you can help suggest what else i need to own.

first up is the bobbinsaver! in my head i was imagining building some sort of wall hanging thing to store my thread spools and bobbins together. but i'm not too handy in the building things department. i can barely hang a nail on a wall. although i did semi-successfully put together 2 dressers and managed to hang up curtains. i received a power drill from dad awhile back and it is kinda fun, although intimidating. anyway building a thread storage thingy was one of those projects that i would just keep on the back burner forever and it would never actually get built.

i have my thread in a glass display case from grandma see here and all the guttermann, which i use more frequently, in a cigar box that looks cool. but the bobbins just can't hang out in the cigar box. they go everywhere and start unwinding and it's just chaos. i can't have chaos, so the bobbinsaver came to my rescue. this thing is amazeballs! (funny how i'll type a word that i never really use in real life.) it's this rubbery doughnut shaped thing. your bobbins pop right in and out and the thread stays in place. it's pretty genius. love love love. 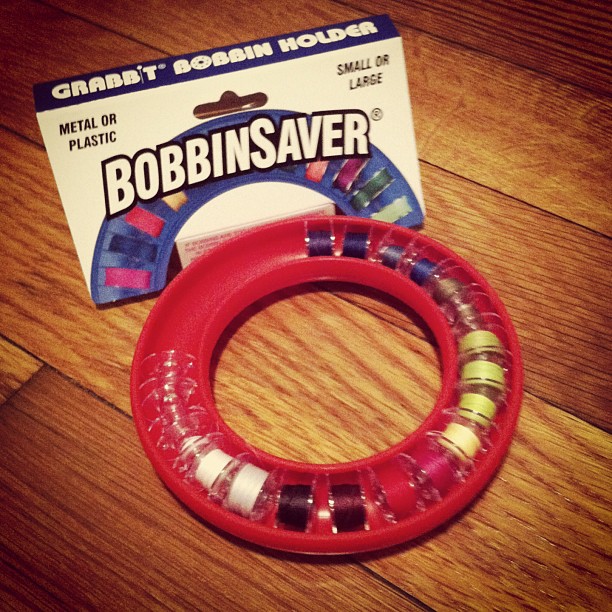 that's a photo of mine, with all my bobbins in place. i ordered it off amazon, just type in "bobbinsaver" and it should pull up a few results. the exact listing i used is no longer up. i paid all of $2 plus $4.99 shipping.


next thing - sewable swedish tracing paper. i've read it mentioned in multiple blog posts. i finally broke down and bought some. and it's awesome. light-years ahead of the parchment baking paper i've been using for tracing patterns and making adjustments. it feels almost like a lightweight interfacing, kinda cloth-like, and very easy to draw on. i have yet to actually sew on it, but i bet it works fine. all the photos i took were lame. it's a roll of paper, so i bet you can imagine it. again, i ordered from amazon, here's a link, but the price and vendor changes from time to time. i think i paid $10 plus shipping, and one roll is 10 yards long by 29 inches wide. the size is sooo much better than the parchment paper and it doesn't curl back up on you like crazy. so if you're tracing patterns (what? you don't trace your patterns! shock and horror!) you should try this stuff.


do you have a bobbinsaver or use sewable swedish tracing paper? or is there another sewing notion you swear by? and what else should i buy with these giftcards!?