ok well this is just a tad delayed. i already gave this as a gift over a week ago! 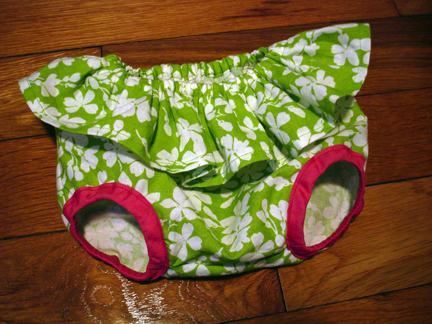 i made a matching diaper cover!! it goes with the cute little lilly-esque "Bapron" that i made. at the end of that post, i was contemplating adding a little bow. well i wanted to, but i didn't. i ended up needing that last little piece of pink bias tape for the leg holes of this diaper cover. i didn't feel like running back to the store just for bias tape. my husband offered to grab some, but he probably would be looking for something by Scotch® brand. tee hee. anyway, it was juuuuuust enough. almost not enough. i kinda wanted to do either the waistband or the edge of the ruffle in pink bias tape too (or both! pink overload!!), but again, i ran out.

i used the tutorial over at See Kate Sew. find it here. but i made it a little larger because she listed that the pattern is only for 0-3 mos. babys grow so fast - from what i hear. i made bias tape out of my fabric to cover the waistband edges because i didn't want serged seams around a sweet little baby tummy. and i did french seams for everything else. next time i would try the pattern over at Dana Made It. find it here. it has multiple sizes and you could easily attached the ruffle, which is just a super long rectangle of fabric. i would also omit the crotch seam by joining the front and back pattern pieces into one piece. and i would sew the bias tape on the leg holes flat, then insert the elastic and then sew up the side seams, because sewing the tiny leg holes in the round was a pain in the baby butt.

all in all, they turned out cute. i didn't have an actual baby to test the fit, so we can only hope. here's the cute little set in all its hot pink and lime green glory… 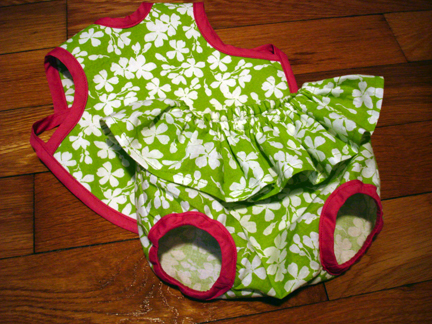 they were well received. yay!

andddd, i haven't touched my sewing machine since. ahhhh. i had plans, but getting sick got in the way. stomach flu. stayed home from work for 2 days (last thurs and fri). so i had a ton of time i could have spent working on projects, but i felt like crap and had zero energy, so nothing got done. that also meant that i missed 2 christmas parties =(  i barely left the house for 4 days. i had been upset that i wouldn't have time to whip up a dress for the fancier christmas party, so then earlier in the week i ran out and bought a new dress. which i loved. and then i didn't even get to wear it! grrr. it'll get out some other time i guess. so now i'm glad i didn't sew a dress, because then i would've been super p.o.'d to not get to wear it. right? right.

i need to get some fabric because i have plans for sewing little christmas presents and i need to hop on it! 2 weeks!!! ahhhhh. luckily i have a bunch of vacation time coming up.

anyone else still sewing christmas presents?

Posted by soisewedthis at 5:40 PM