i was riding on a high from my super adorable baby "Bapron" (see last post for details.) and thought… wouldn't it be cute to make matching shoes! wrong.

well i made one shoe. 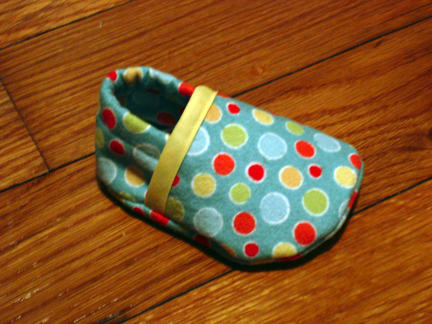 and i wasn't happy with it. i must say, it does look better in this photo than i think it does in real life. issue #1, the insides… 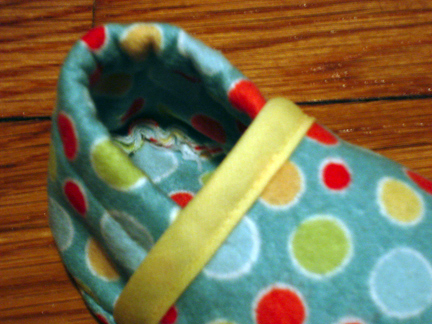 check out those rough edges! ok, so they aren't really rough. this is fleece anyway. but the edges are raw inside. i did use my pinking shears. maybe i could've attempted a french seam inside or a flat fell. but this thing is tiny and not so easy to manipulate on a sewing machine.

issue #2 is that the elastic around the top pulled on the front of the shoe too much. before i took the photos i cut the elastic (mainly because i was irritated with it) but you can still see a shadow in the photo on the side of the shoe where it causes pulling. maybe that's unavoidable.

or maybe i'm being too picky. this is just a baby shoe. but it is a gift. and i want it to be awesome. and it has to live up to the super cute "Bapron" because they would be a matching set.

i guess if the baby is wearing socks, then the raw insides wouldn't matter as much. i just think i would've done it differently - sew the outsides, sew the insides and then insert the insides as a lining and then probably do some hand sewing to attach them. I added the bias tape to the front piece to match the "Bapron" - that wasn't on the pattern. This was a free pattern though. and i'm sure someone spent a lot of time coming up with it and i've seen a lot of photos that look very successful.

but not mine. so i have a sad lonely right shoe. 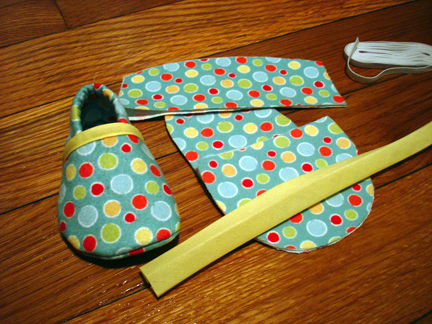 and i was even more irritated because of the time i spent tracing, cutting, ironing, interfacing the parts… and now i don't even want to make the other shoe.

i have been scheming in my head about making my own baby shoe pattern. i could totally do it and i have an idea for a cute little bootie (with no raw insides!) but it would be helpful to have an actual baby to test the fit. so… until i politely ask a friend if i can borrow their baby's foot…

what could i do to lift my spirits after a failed baby shoe? (besides eating half a carton of moose tracks and watching an hour of house hunters on tv)

make another "Bapron" of course!!

this time a la Lilly Pulitzer! very charleston indeed! ok, this is not actual Lilly fabric. but it's hot pink and lime green, so come on! and my friend is having a girl, so why not? 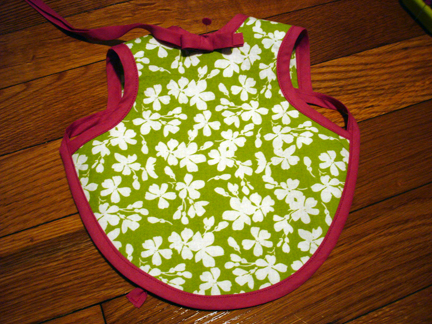 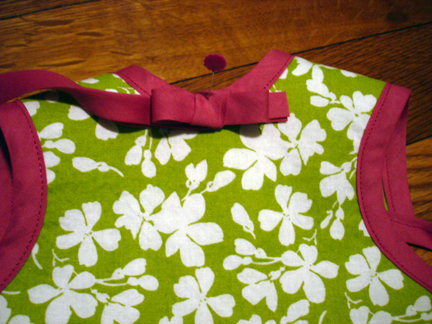 that was just a quick mock-up. i haven't actually added it yet. what do you think? to bow or not to bow?

and i just found 2 free patterns to make baby diaper covers! i could make matching ones! or should i just quit while i'm ahead? they might end up like the sad little shoe? hmmm.

maybe it's time to get started on the christmas gifts… but baby stuff is just so dang cute (when it turns out well).
Posted by soisewedthis at 2:57 PM